Help! My Cat Keeps Kicking Itself! 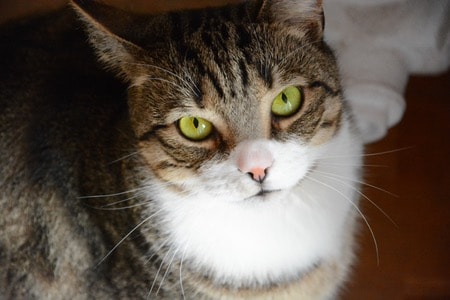 You’ve probably seen videos online in which kittens and cats kick themselves in the head with their hind legs while playing. Try searching it online if you haven’t seen it, there are literally hundreds of them. You probably know that behavior because cats like to do it when you try to pet them on their belly when they are playful or irritated.

They usually grab your hand with their front legs and then kick it with their hind legs. That kind of behavior can leave you scarred if you don’t let go on time. So, why do they do that? We don’t know exactly. However, we can guess.

This behavior is not that strange because cats have been doing it for ages. And not just domestic small cat breeds like ragdoll mixes, we can see that kind of behavior in tigers, lions, pumas, and many other large cat breeds.

Kittens are a small bundle of furry joy armed with tiny sharp claws. They don’t possess much power in their muscles, but if they catch you unprepared, they can leave a mark on you. However, small cats are not aggressive, and they won’t hurt you out of sheer anger. They like to play.

They spend most of their time playing with their toys or other kittens. That’s it. They eat, play, and sleep. They go out and explore. During their youth, cats learn important skills which they will find useful later in life. Employing their hind legs to kick things is one of them. If the kitten doesn’t have brothers or sisters, you will often see him kicking himself with his back legs while playing. That behavior is also pretty normal. They do that because it is in their blood.

It’s one of those things cats inherit from their ancestors, and they are born with it. Using their hind legs to kick is a form of self-defense. Since kittens generally don’t get in a situation where they need to fight for their lives, they do that to entertain themselves and to brawl with their siblings. However, with adult cats, it can mean something completely different.

When it comes to adult cats, playful kicking isn’t always playful. You’ve probably had cats throwing themselves on their back in your proximity, in a way it looks like they are asking you to pet them on their belly. However, as soon as you tried to pet them, you were attacked. It felt like a betrayal, wasn’t it? When cat throws herself on the back and exposes her belly, it doesn’t always mean they are looking for play-time or petting. When the cat is on her back, she is in a great self-defense position.

She can easily use all four of her paws to fend off an attacker. And don’t forget about her sharp teeth. Exposing her belly doesn’t necessarily mean she is comfortable. Most animals hide their belly because that is where all the vital organs are located. On the other hand, not many animals have razor-sharp claws and teeth attached at the end of their legs. Cats put themselves in that position because they know they can defend themselves from there.

However, cats don’t grow up, they just get older. If your cat is seven years old, she will probably freak out every time she sees a piece of string or a plastic bag.

They are kittens trapped in adult bodies. Sometimes they will play with you or other cats in that way. Usually, if they don’t use too much force, they are playing. If you don’t need to wash the blood of your hands, it was probably just a play time for your cat. If you sense that your cat is getting more and more aggressive, you should back off. It is her way of saying that you should step away and leave her alone.

Kicking themselves, you, and other cats with their back legs is just one of the strange behaviors cats are known for. However, there are many other strange cat behaviors that we want to go through in this article.

Cats are strange little guys. Most of their behavior is strange, so it’s not that strange that 70% of content on the internet are the cats. If you see your cat kicking things or herself with back legs, it most likely means that she is playing. However, if that behavior is accompanied with hissing and intensive kicking and scratching, she just wants to be left alone.