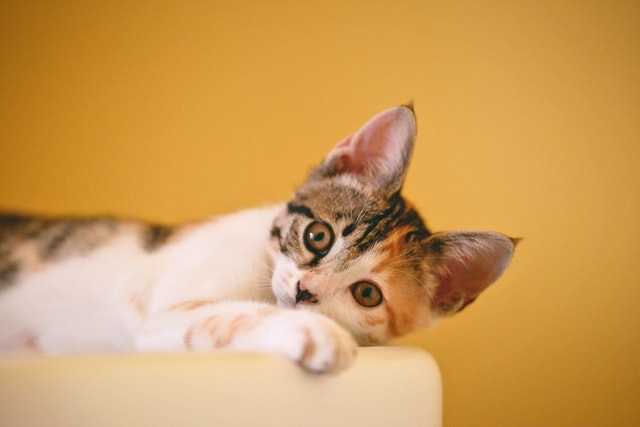 Pretty Litter is a different kind of subscription service. They deliver an alternative to your typical, gray litter. Instead, they provide a silica based litter that helps you get insight into your cat’s health. The litter reacts with the pH level in your feline friend’s urine, and changes color to give you a leg up on keeping track of your cat’s health.

It sounds neat, right? For many cat owners, there’s still a lingering concern about how well Pretty Litter functions as a cat litter. Will it prevent tracking, or is it dusty? How budget friendly is it, and how long will a bag last? How well does it contain odors? Will cats actually use the litter?

We too, asked ourselves these questions, so we took our cats on a mission to find out. First though, let’s take a look at the history of this company.

The History of Pretty Litter

Carly Martinetta, the creator of Pretty Litter, found herself feeling down whenever changing the litter. It’s a concept she calls ‘litter depression’. This sparked the idea for Pretty Litter, as a way to bring more color and brightness to the litter box.

Startup U, an ABC family reality show, featured Carly in the top three participants in 2015. The competition took her through several meetings with experts in all areas of product development. These experts helped her develop the finished product, and begin her company, which was cofounded by Daniel Rotman.

Pretty Litter is no longer just a way to brighten up the task of changing the litter, it’s developed into a multifaceted subscription. While it is trending, this silica gel litter is a great alternative to clay, and even better, it helps you keep an eye on your cat’s health.

How Does Pretty Litter Work?

Since Pretty Litter is a subscription, you don’t need to take time out of your day to pick up litter. This litter is very user friendly, and quickly gives you a read on your cat’s health when the litter changes color.

This litter can easily be maintained over a month, no scooping required. The silica gel crystals in the litter begin clumping on contact, and quickly absorb odors. Rather than scooping, you take out solids and mix in the liquid solution. Stir well to help better absorption, and repeat daily.

After the litter has become fully saturated (reached the max it can absorb), small amounts of liquid may gather inside the base of the litter box.

How does the health monitoring color technology work?

When you pour out the bag of Pretty Litter, you’ll notice some small orange specks. These are actually pH detectors that change color once they get wet. They react with the pH of your cat’s urine, and change from orange to deep blue.

This could be an indication that your cat has a urinary tract infection; urine high in alkalinity can form struvite crystals, a common sign of a possible UTI.

Low pH in your cat’s urine will be more acidic, and make take part in forming calcium oxalate crystals. Acidic levels of pH in urine can also be a sign of kidney tubular acidosis or metabolic acidosis.

It’s important to remember that Pretty Litter is not a diagnostic tool, nor is it a substitute for veterinary care.

Saturated litter can contribute to a dark blue color and slushy kind of texture, but Pretty Litter still only monitors the pH in your cat’s urine. A ton of different factors outside of illness can change the pH of your cat’s urine. It can even be affected by stress, weather, or feeding your cat a new food. This litter can’t determine if there’s a problem, what the problem is, or if your cat is sick, that is a job for the vet.

Is Pretty Litter natural and safe?

Pretty Litter is harmless to use around cats and kittens. If some of the litter is ingested (as is common when cats groom themselves, or with young kittens), it won’t harm them, since it’s free of chemicals and doesn’t injure their GI tract.

In short: you can have peace of mind; this litter is safe for cats.

We’ve talked about the litter itself, and how it functions, but now it’s time to get into how the whole experience plays out. Of course, the journey begins at Pretty Litter’s website. As you begin orderng, there are helpful prompts to help you get the right fit. You’ll be asked how many cats you have (between 1 and 3), and Pretty Litter will put together a fitting package for your household.

In my case, I specified two cats, and was directly to a once a month delivery plan, with two, 4 lb bags of litter. For a month’s supply it was under $40. My supply of Pretty Litter shipped the next day, and was ready for pick up about a week and a half later, at the post office after being dropped off by FedEx.

It’s a much different experience than lugging a heavy bag of clay litter in and out of your shopping cart. Really, the weight was almost so little I doubted it would last me through the month. Opening the box, I found two small bags of Pretty Litter, a guide to using the litter correctly, and even a ruler printed on the card to help measure it out.

It’s pure white, pretty,  and resembles tiny ice crystals. It’s spotted with tiny orange and yellow flakes.  These colored flakes are known as pH detectors which change the color of the litter to detect health issues with your cat. When your cat uses the litter, the pH detectors will change color from either green to blue – a sign of alkalinity or orange to red – a sign of acidity. Imagine that! A handy diagnostic tool to alert you to a health issue with your cat’s urine.

The Pretty Litter company recommends filling the litter box to a depth of two inches. This amount will guarantee the user the best quality of absorption. It will also keep the litter from over-saturating before the month is over.  To help the user get the right depth, the Pretty Litter people include a card to help measure. Pretty Litter states one 4-lb bag of litter will fill a litter box sized 15” by 11”.

Pretty Litter knows that one bag isn’t enough for every box and they’re willing to help make it work.

If your litter box is larger and 4-lbs won’t last a month, Pretty Litter wants you to be satisfied.  For the first thirty days after your purchase, they’ll send more litter at no additional cost to you.  Of course, after the thirty days are over, you need to purchase it yourself.

The cats started using it immediately.

A couple of my cats don’t like hard or gritty feeling litter under their paws. The Pretty Litter is finer than clay litter and gentle on paws. It’s a texture even the finickiest cat would love.

The cats loved using the Pretty Litter.  They returned to it again and again when nature called. I’d pick out waste, give the litter a stir and done. Way easier than scooping out heavy lumps of clay. It made ‘changing the litter box easier.

Does Pretty Litter track a lot?

Any litter will spill over the box when a cat digs around or bury their waste. So Pretty Litter was  standard in that aspect. However, I didn’t notice any tracking when the cats jumped out of the box. No litter on the floor or the bottom of the cat’s paws.

In reading the reviews before purchasing Pretty Litter, some people said it was over the top dusty.  I didn’t notice that at all. In fact, it could rightly claim it’s a dust-free litter.

On a score of one to ten for odor control, Pretty Litter gets a ten!  When a cat was doing its “business” there might be a little odor, but it quickly went away. There was no smelly urine odor to hit you in the face.

Why does your Litter Robot smell?

After 10 days, the litter wasn’t smelling too great and it had turned a uniform shade of yellow.

It’s normal for the litter to lose the ability to control odor as it gets used.  Any litter will eventually become saturated and reach the end of its ability to absorb the urine and odors.  As the litter absorbs more and more urine, the Pretty Litter will change to yellow.

About the time we reached day ten using the Pretty Litter, I could smell the urine when cleaning out the box. It wasn’t over the top – it didn’t hit guests in the face when they walked into the house, but it was there. The cats didn’t seem to mind and kept on using the box normally.

Does the litter change color?

I didn’t get to see the litter change color because my cats’ urine stayed in the healthy range.  After two weeks, there were some green flakes in the litter box. They were dark green and not orange as they’d been originally.  Pretty Litter says this is normal. It indicates you need to replace the litter with a fresh bag of litter.

Once testing was complete, it was easy to cancel the subscription.

If  Pretty Litter is not for you, it’s simplicity itself to cancel your subscription.  Go to your user account, click, “manage subscription” and cancel with one click.

How much does Pretty Litter cost?

Prices can vary.  The standard cost of one 4-lb bag of Pretty Litter is $22.  If you order in bulk, your price is reduced. Two bags per month is $39.  Four bags per month is $68 – so you pay for three, get one free. Pretty Litter wants to make their litter affordable even to people with extreme litter needs. Shelters, rescue homes and other multiple cat families may need to order in bulk.  Customers who order ten bags pay $150.

The good news is that shipping is free for all 48 contiguous states in the US.  You will have to pay for shipping to other states or for international orders.

When you look at the choices in litter, Pretty Litter is one of the most expensive. Most similar litters – silica gel or other “fancy” litters – normally retail for about $10 a bag or box,  less on sale. But with Pretty Litter, you have to pay for the added convenience of ordering through a subscription and also having a litter to detect health problems via your cat’s urine. The peace of mind alone is well worth the cost.

If the cost doesn’t scare you away, Pretty Litter can be totally worth it.  It’s convenient. You order through subscription and it’s delivered. How easy is that? The gel crystals are absorbent and great at odor control. Cleanup is a breeze and easier than standard fillers.

Imagine one bag per cat per month. For multiple cat families, this can add up.

Where can you buy Pretty Litter?